How Windows Tablets Can Enhance Your Business, Part I 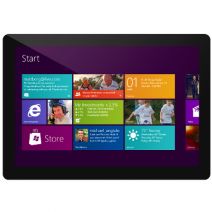 Smartphones and tablets are the new norm. Most professionals have begun to utilize mobile devices to accomplish tasks when they are away from their work PC. Not to say that these devices offer all that much in the way of productivity. Sure, there are plenty of software titles either ported over from the PC or developed directly for the mobile environment, but sometimes these titles don’t offer the functionality, or they take up too many of the device’s resources to be of much use. With these variables to consider, manufacturers are searching for the best way to deliver devices with enhanced productivity capabilities, right out of the box. One of these manufacturers is Microsoft.

Unlike Apple and their ecosystem lock strategy, Microsoft rarely produces Windows-based hardware. In fact, one of Microsoft’s most strategic moves over the years has been licensing their software solutions (operating systems, productivity apps, and more) to partner original equipment manufacturers (OEMs), so they could profit from the dissemination of this software without taking on the cost of manufacturing the devices themselves. As a result, over 95 percent of all desktop PCs and laptops run some version of Microsoft Windows.

With other software manufacturers finding success in the mobile market, including the skyrocketing popularity of Google’s Android platform (using the same OEM strategy) the world’s largest software developer decided to enter the fray with their Microsoft Surface line of tablets in 2012. Using their “new” metro user interface, they built a platform deliberately designed to work on mobile; however, there were problems. The first Surface was only offered with the Windows RT operating system. At the time Microsoft was years behind their competition in the most essential element of running a mobile computing system: they lacked applications. The RT version of the Windows 8 software doesn’t support legacy applications, and there weren’t many options on the fledgling Windows Store. It was easy to see how most serious mobile consumers didn’t consider Windows-based tablets viable computing platforms to use for business.

This was remedied soon after when Microsoft delivered its first tablet complete with a full version of Windows 8. The Surface Pro provided users the ability to have access to any piece of software they would normally use on a PC, on a mobile computing interface. Since then Microsoft, and its OEMs, have been delivering tablet computers that have the advanced capabilities that come with the Windows 8 operating system. So while application development hasn’t come as far as users would hope (due in large part to a small share in the tablet-computing market), Windows 8 provided an interesting, albeit questionable, opportunity.

It was only after Microsoft launched the first service pack to Windows 8, titled, Windows 8.1 that users started to see the viability of the interface for productivity. This is mainly a result from the security and networking capabilities improvements integrated into Windows 8.1. The update added BYOD enhancements, improvements to device mobility (VPN, mobile hotspot integration), and security improvements (remote management, enhanced encryption). With these options more businesses have taken notice of the mobile Windows 8.1 platform.

Since it took literal years for Microsoft to develop the software to the point where the ease of use, app development, and integrated security was at the level of the more popular Android and iOS-based platforms, many OEMs haven’t pushed as hard to create and sell consumer-viable tablets that run Windows 8.1. The Windows 8.1 interface, however is one that proposes a great deal of benefit for building a modern office. In part two, we will provide specific examples and suggest devices that can work to securely increase your company’s mobility.

Tags:
Microsoft Productivity Tablet
How Windows Tablets Can Enhance Your Business, Par...
Tip of the Week: Engage Your Workforce to Improve ...

Is the New, Stripped-Down Version of Windows 10 Practical for SMBs?

Windows Ink Adds An Extra Dimension To Your Business Computing

Tip of the Week: No Internet? No Problem! 3 Ways to Be Productive Without the Internet

Tip of the Week: How to Avoid Back Pain and Eye Strain in the Office